You probably have a few gaming sites you visit at least three or four times a week to keep up on what’s happening in the industry, check out reviews and hopefully look for some interesting games discussion. I bounce between several, but I usually start my morning checking IGN and Polygon, as I know the latest press releases will be there. This is mainly out of habit, and if you visit those two sites regularly, then you may have noticed a couple of things. First, there’s a lot of the same stuff on both of them (although this is par for the course with regard to industry news). And second, there seems to be less and less gaming-related items on those sites than ever before.

I took screenshots of several gaming news sties this morning, just to compare what the first things you see on each page are. Here’s the results: 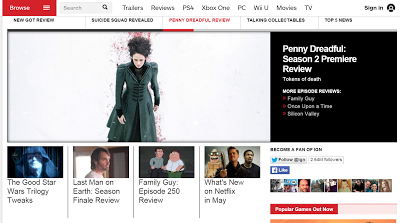 Pretty much all TV and movie-related news and discussion.

Same here, with one exception.

If you’re a Premium subscriber, you can watch some cool stuff.

Very interesting article. And if you scroll down from the Silent Hill article, a lot more interesting games discussion follows.

So, what can we make of this? First, I think that the good news is there’s still some great games discussion and coverage happening at some big sites. But, it’s maybe not the sites you’re used to starting at. IGN and Polygon seem to really be increasing their pop culture coverage, so that games are one of the things they talk about, not the thing. And that’s fine, as is Giant Bomb’s pushing of their premium subscriber content (and GameSpot, the more traditional gaming site, is a sister site of GiantBomb).

I know that USgamer puts our great content, and that’s no surprise considering the people they’ve got over there. And Offworld is off to a very strong start. Tip of the cap to GameSpot, who is still a major outlet and is managing to keep most of their content relevant to games. They have to put up a lot of the same PR garbage as the other big sites, but it’s balanced out with some really interesting stuff as well.

If you are interested in and care about games discussion, support these other sites that are trying to still make games their main thing. Because as you can see, they’re kind of on the endangered species watch list. And the less we support them, the quicker they’ll disappear.