Diary of a Monster Hunter–Part 2: The First Parallel

Well, it didn’t take long into my time with Monster Hunter 3 Ultimate to see the first strong parallel with the Souls series of games. Much like both Demon’s Souls and Dark Souls, Monster Hunter is a game that almost requires you to seek outside help in order to understand its systems and maximize your efficiency in terms of game time. Fortunately, there’s an even bigger community built up around the Monster Hunter series than the Souls series, so there’s no shortage of places to look for help when it comes to understanding the game and its systems.

I tried to go it alone, but you basically arrive in a port city to start the game, and then talk to a bunch of people to get the lay of the land. None of those encounters are particularly helpful in terms of making weapon choices, or thinking about how to start shaping your character. Because upgrading things take resources that you must collect (just like the Souls games), I didn’t want to waste any of those resources exploring upgrades paths I would abandon later.

So, after a few quick searches, I found a great tutorial on getting Started in MH3U by YouTube user DMJared. Entitled “The Beginner’s Guide to Monster Hunter,” this series of videos offers a clear introduction to the game, its systems and the world itself. Despite the narrator sounding like he’s doing a bad NPH impression, the videos are very well put together, and are really funny at times as well.

Having watched the series and begun some of my first monster encounters, I feel well informed enough to slog through the first few hours of the game. Much like my time with the Souls series though, I will be gathering and storing resources before I make any final decisions an what gear I’m going to seriously upgrade.

Diary of a Monster Hunter–Part 1: Does This Game Have Soul?

Well, I finally did it–I bought my first Monster Hunter game. Yesterday, I picked up Monster Hunter 3 Ultimate for my 3DS XL. After everything I’ve seen and heard about the series over the years, I decided to take the plunge and see what it’s all about.

Mostly though, I picked up this game because it appears to have some similarities to Dark Souls and Demon’s Souls, two of my all-time favorites. In fact, I think it’s safe to say that my enjoyment of Monster Hunter 3 Ultimate will come down to how real those similarities are.

So, from the outsider’s perspective, here’s what I presume the similarities between the series will be:

1. Combat is pattern-based. In the Souls series, every enemy has a tell, and every animation counts. Getting good at combat means knowing when to strike, and exactly how vulnerable a particular attack makes you. Monster Hunter seems to take a similar approach to combat, and that’s very interesting to me.

2. Larger than life bosses. The boss battles in the Souls series are some of the most memorable I’ve had in any game. Monster Hunter to me seems like a game made up almost entirely of boss battles. 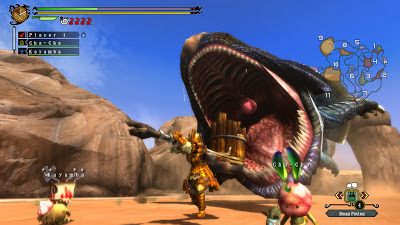 3. Building the right gear for the job. One of the best things about the Souls series is that you’re constantly building up your gear and weapons to take on the different threats you face. There seems to be a premium on that in MH3U as well.

So, as I begin my first foray into the Monster Hunter universe, I’ll be writing about whether my perceived connections to the Souls series pan out, and whether I enjoy the game for what makes it unique as well. Stay tuned!