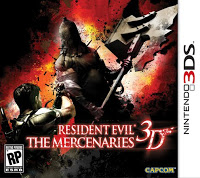 Capcom Feeling the Heat Over RE: Mercenaires

by Brian LeTendre
Waves were made recently when Capcom revealed that the new Resident Evil: Mercenaries for the Nintendo 3DS handled game save data in a rather restrictive way. The game data saved to the cartridge can never be reset by the user.  Not only can the original purchaser never start over from scratch in terms of data, but anyone purchasing the game second hand will not be able to delete the game progress of the previous owner.

Capcom has not explained the reasoning behind their decision to not include the functionality in RE: Mercenaries, but they claim that their intention was not to negatively affect secondhand game sales.

1Up reported that GameFly is not renting the game, and that some GameStop locations will not be accepting the game for trade-in.

Capcom is pretty much being vilified in the games press right now for what is perceived as another attempt to stop consumers from being able to trade or resell their games. It’s no secret that publishers hate the used games market, primarily because they don’t directly profit from it.

So here’s my question: Why shouldn’t Capcom and other publishers try to kill the used games market? Their fears about the used games market are completely valid. Used games cost publishers sales, period. If I were running a publishing company, I would want to destroy the used market. As a publisher, I make money when people buy new games, so I want to make sure anyone who wants to play my game has to buy it new, and make me money.

I am exactly the type of consumer that publishers should worry about. I play a lot of games, and I buy at least half of them used. For every new release that I am even remotely interested in playing, I make a choice—either I will buy the game new, or I will wait and pick up a used copy in a couple of months, unless the price for a new copy drops significantly.

Just from my own buying habits, I can’t blame publishers for wanting to do something about used games. I just don’t think that killing the used market is the answer to publishers selling more new games. In my opinion, the answer is as clear as day—lower your prices. $60 for a new game is a flat out ridiculous price.  In my mind, $40 is the magic price point. I know I’d buy a lot more new games at $39.99 than at $59.99. In fact, I picked up Crysis 2 when it dropped to $39.99 new. There’s a lot of games I’d pick up at that price point.

Another possible solution that publishers have yet to embrace is a tiered pricing system for console games. Asking $60 for the next Elder Scrolls game is one thing. Asking $60 for the Green Lantern movie tie-in game is shameful. There’s no reason that there can’t be a tiered pricing system that is widely embraced by publishers. It would result in more sales for games that don’t have the resources to be a AAA experience. Put the Green Lantern game out at $25 and sell a million copies, as opposed to the 75,000 copies you’ll sell at $60.

Again, the tiered pricing answer is how I think publishers could impact the used market, but I’m sure there are other ways as well.  What I do know is that punishing the consumer in an effort to curb used games sales is not the correct answer. It just turns consumers against the publishers that are trying to get them to buy new games. Hopefully Capcom heard that message loud and clear, but only time will tell.