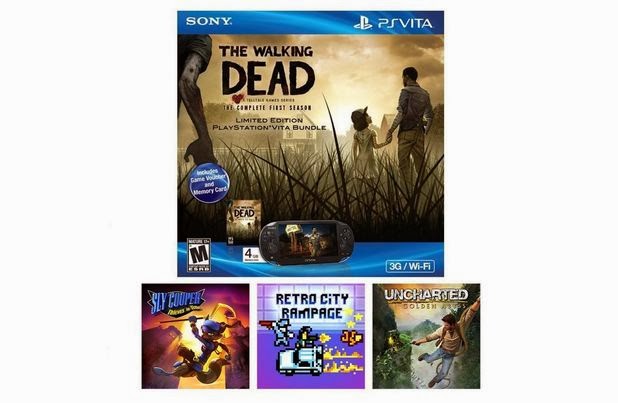 Curse of the Early Adopter, Or: Why I Just Bought a PS Vita Again

Games, people. Games. That’s what it really comes down to.

That’s why I’m sitting here staring my new PS Vita, the second one I’ve bought in the past two years.

Yup, I was one of the early adopters that bought a PS Vita back in early 2012 when it debuted in the U.S. And by January of 2013, I had traded my Vita in when I purchased a WiiU. The main reason I got rid of the Vita (other than needing cash for the WiiU), was because of the lack of good Vita games. The irony is that I traded in the Vita and bought a console that had the exact same problem as the Vita. But that’s a sob story for another time.

Fast forward to 2014, and I grabbed one of the Walking Dead bundles off of Amazon, which netted me the Vita, a 4GB memory card, and download vouchers for The Walking Dead, Retro City Rampage, Sly Cooper: Thieves in Time, Uncharted: Golden Abyss. Those four games right there are better than any four games I had at one time for the Vita the first time around.

Add to that the fact that with PlayStation Plus, I have access to the aforementioned Uncharted, Wipeout 2048, Gravity Rush, and more. The icing on the cake is the ridiculous Steam-like sale Sony just had, where I picked up Soul Sacrifice, Thomas was Alone, Spelunky, Stealth, Inc., Killzone: Mercenary and Lone Survivor.

For the same price I bought my original Vita, a game and memory card for, I now have a library of over a dozen of the best games to come out for the Vita.

The lesson here is the same one I learned with the WiiU, and the same one that PS4 and Xbox One owners are learning right now–new consoles rarely launch with a lineup of great games. For many consoles, the first year is filled with mediocre ports and a lack of titles altogether. So if you can just wait, if you can just hold off for that one year, you can usually get a better deal for the console overall, and have plenty of great games to play on it.

I did not heed that lesson when it came to the WiiU, and the first several months of that console were pretty rough, which is one of the reasons it’s struggling so badly. Had I waited until this holiday season, I could have grabbed a great WiiU bundle and would have had a bevy of great games waiting for me.

The good news is that so far, I’ve been able to hold off on getting either a PS4 or an Xbox One. With my current consoles and the Vita, I have more games than I can possible play right now. I may finally be learning my lesson when it comes to early adopting.