Man, I hate to be that guy.

You know, the guy who’s all like “They changed my beloved franchise into something I don’t recognize anymore just to sell more copies to the mainstream!” That guy.

But, as much as I hate to say it, they changed my beloved franchise into something I don’t recognize anymore just to sell more copies to the mainstream.

And by my beloved franchise, I mean the Dead Space franchise. Because Dead Space 3, to me, is a stark contrast to the survival horror game that was the original, and it took the worst parts of Dead Space 2 and used them as building blocks for the third game.

Have I mentioned I love the Dead Space franchise? Because I do. I covered the hell out of the original game during my days at CBR. My pal Antony Johnston worked on the first game, wrote all of Dead Space Extraction and wrote some great tie-in comics as well. I interviewed the writer of Dead Space 2 on Secret Identity. I’ve read all the comics, and the tie-in novel. I’ve watched all the animated films (the first of which was written by comic superstars Jimmy Palmiotti and Justin Gray). 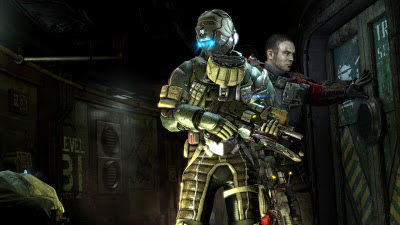 I tell you all that because I really do love the Dead Space world. And both the world, and the games themselves, are firmly rooted in horror. The first game was a genuinely scary survival horror game that helped keep a failing genre afloat for a few years until other games started picking up the slack. Dead Space Extraction featured simplified mechanics but retained the great story and tension of the first game. Dead Space 2 was the equivalent of Aliens to the first game’s Alien, taking the action up a notch but keeping the scares and expanding the world at the same time. There were some questionable design decisions in Dead Space 2, but the whole of the game overshadowed any of the stumbles. 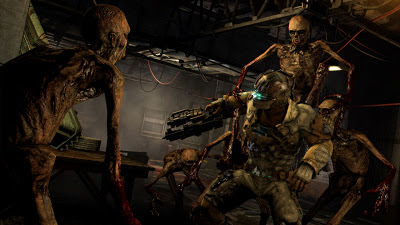 With Dead Space 3, the pendulum has swung completely to the action side, at the expense of both the storytelling and the horror of the first two games. The two places where this is most evident is in the pacing and in the way combat is approached.

What made the first two games so scary was the methodical pace they had. You would frequently find yourself introduced to an area and then be forced to explore it before any real combat began. Tension would continue to build, as there could be several minutes where you did not see an enemy, or perhaps just caught a glimpse on one off in the distance. When combat did occur, it was less about dealing with hordes of enemies and more about using your skills to take on small numbers of dangerous enemies at a time.

Dead Space 3 still uses pretty much the same mechanics as the first two games, but they don’t hold up as well because the nature of combat has changed significantly. Most encounters are with multiple enemies of different kinds, so I constantly have to use my stasis (slow things down) and kinesis (throw things around) abilities in conjunction with my weapons. And this is where things break down. Isaac moves pretty slowly, and aiming is imprecise. Which often means that I’m either wasting precious stasis blasts by missing enemies completely, or I’m waiting until they get in close enough to guarantee a hit, which defeats the purpose. So, combat often devolves into me firing wildly at the three enemies that are now on top of me, and trying to stasis them long enough to stomp them to death. Elegant it is not.

And that for me is the most glaring inconsistency in the design of Dead Space 3. The world itself, the atmosphere of the game and the mechanical systems seem designed for a methodical survival horror game, but the combat feels designed for a much faster action shooter. The result is a game where I actually dread combat, and as soon as I run into a frustrating encounter, I end my play session.

I could not stop playing Dead Space 1, 2 and Extraction. I have to force myself to spend time with Dead Space 3. That’s a real bummer. In many ways, I just wish someone would novelize the events of Dead Space 3 so that I could keep up with the story, but not have to play the game.