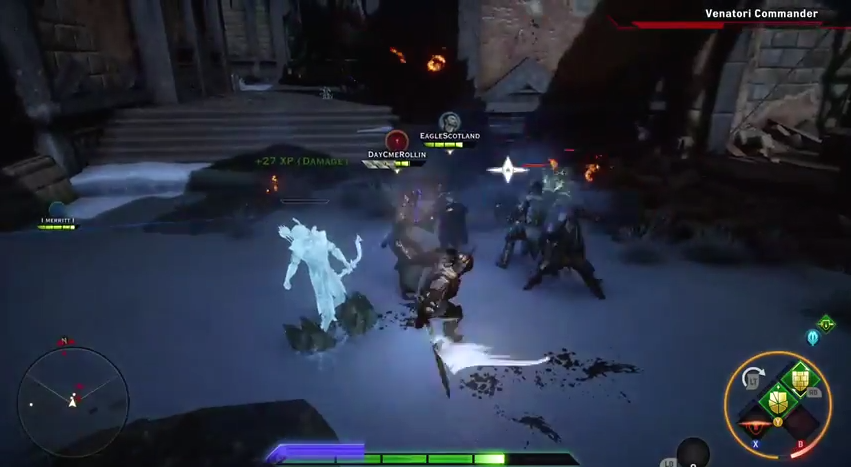 I have put about 40 hours into Dragon Age: Inquisition’s (DA:I) single-player campaign so far, and I am totally loving it. Until this past weekend however, I hadn’t even touched the multiplayer component of the game. That’s hardly out of character for me, as I never played Mass Effect’s multiplayer either, despite hearing about how great it was. When it comes to RPGs, I am a single-player kind of guy, and I really had no interest in DA:I’s multiplayer, as nothing you unlock or earn in it can translate over to the single-player game.

But, fellow Co-Opper Nick convinced me to give DA:I’s multiplayer a shot, and it turns out it’s a blast.

The mode is a four-member, horde mode-style experience where you team up with others and try to make it through five areas of what amounts to a dungeon. If the party gets wiped, you’re done, but you keep any rewards you’ve earned up to that point. You earn XP and gold along the way, which can be used to upgrade your abilities and purchase random item and consumable packs, respectively. You begin with a choice of three different characters, but unlock nine more along the way, eventually giving you a stable of twelve to level up and equip.

There’s more to it than that, but you get the gist. Int he video below you can see Nick and I blast through a mission with two random players.

I’ve only played with the Legionnaire so far (a Dwarven fighter), but I’m having a lot of fun with it. The combat is exactly the same as the single-player game, and it’s more dynamic (and sometimes challenging) when you’re playing with actual people instead of AI in your party. At it’s core, this is basically a 4-player, D&D-style dungeon crawl. And it’s a heck of a lot of fun,

I plan on spending more time with the mode and unlocking additional characters. I’m sure I’ll post more about it, and DA:I in general, in the coming weeks.