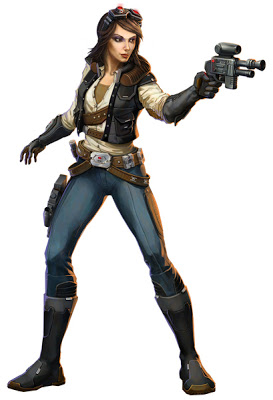 Force Test–Part 1: It’s All About Atmosphere

After spending a couple hours with the just-released, free-to-play version of Star Wars: The Old Republic, I’ve already seen some good, some not so good and some very intriguing things.

For starters, the cinematics in SWTOR are amazing. I had seen one of them before (the forest battle between troopers, Sith and Jedi), but the opening cinematic is stunning.

Once I got past the opening, I got to make my character. The transaction-based options are immediately apparent from the get go. While all of the classes are available to F2P players, only three of the species (Human, Cyborg and Zabrak) are available. Of course, you can purchase the other ones if you want. So, I made a female cyborg Smuggler, who is in league with the Galactic Republic.

The character customization options are decent, as there are several different versions of each feature to choose from (hair, eyes, etc.), but not the granular type of customization that offers infinite options for customization. Nonetheless, I was happy with the look of my character and moved on to the proper game.

The Galactic Republic storyline has its own cinematic, which was the one I’d seen before in previews (the aforementioned forest battle).

My storyline began as my character flew into Ord Mantell, a planet embroiled in a civil war. As soon as I began interacting with NPCs, the familiar Bioware conversation system came into play, and it works just as well here as in their other games. There wasn’t a lot of time for chit chat though, as there was a separatist attack going on that I needed to get out there and deal with.

Ironically, the combat is where I had the least amount of fun with the game in my first session. It’s very much the typical MMO style on combat–clicking on enemies, powers and abilities assigned to number keys, etc. The familiar pattern of ‘use an ability-wait for it to recharge-use it again’ feels the same in SWTOR as in other MMOs. I don’t know what I was expecting, but the combat is certainly not going to be the thing that keeps me coming back to SWTOR.

But I will be coming back, and it’s the rest of the SWTOR package that will be the reason. The Star Wars setting, the rich conversation system, and the desire to see my storyline play out are already making me think about this game when I’m not playing it.

I’ll spend some more time with it over the next week and be back to post again.