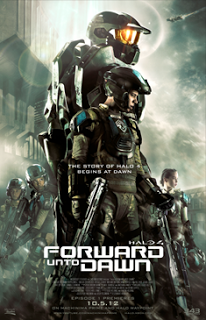 ‘Forward Unto Dawn’ Brought Me Back to Halo

As I write this, it’s Halo 4 launch day, and I just picked up my copy of the game. Two days ago however, I hadn’t even planned on picking up Halo 4 at launch, as I was only planning on picking up one shooter this holiday season, and had made the decision that I’d be getting Call of Duty: Black Ops II instead.

But a funny thing happened over the past couple of days–I came to realize that the Halo franchise is really the only first-person shooter series I’ve been consistently interested in this console generation (and the one prior). Watching the excellent Forward Unto Dawn web series drove home that realization, and after watching the first couple episodes, I preordered the game in the eleventh hour.

When I say that I’ve been consistently interested in the franchise, what I mean is that I’ve played all of the Halo games, and I’ve completed the campaigns in each one. As I thought about it, I realized that the Halo series is the only FPS series that I have completed all of the campaigns in. In Call of Duty, the last campaign I finished was World at War. For Resistance, I didn’t even play the third game. Same for Gears of War. But the combination of story and setting in the Halo games kept me interested in the universe enough to complete all of the games, and it’s what’s brought me back for the latest installment.

I realize that for a lot of people, this is the opposite of why they play Halo. For many, it’s the multiplayer component that brings them back each time. And while multiplayer has always been executed very well in the Halo series, I’ve never been a big fan of it (probably because I’m not very good at it). I usually a handful of hours with the multiplayer of each game, and then move on to other shooters I fare better at. The last time I played a Halo game, it was the multiplayer mode for Reach, and my apathy for that part of the game is why I wasn’t overly excited about Halo 4. So much of the media coverage dedicated to the game is focused on multiplayer, that it’s easy to forget about the campaign.

But the campaigns have always been great in my mind (even Halo 2), and Reach’s was fantastic. The last moments of that campaign provided one of the most emotionally powerful experiences that I’ve ever had in a game. Seeing Forward unto Dawn made me realize that I am excited about the return of Master Chief, and I want to learn more about the Forerunners, and what happens to Cortana’s sanity as the end of her life draws closer.

My interest in Halo over other shooters makes sense to me when I think about my gaming preferences as a whole. I’m an RPG nerd–I need a world I can get immersed in. Story, setting and characters trump gameplay for me. When compared to other shooter series, there’s a lot more to explore in the Halo universe.

So, while Forward Unto Dawn was primarily designed to introduce new players to the series, it has served to bring me back and remind me why I became of fan of the universe in the first place.