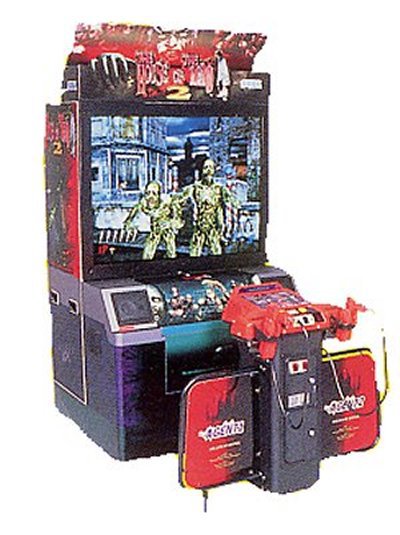 Gaming Stories: The House of the Dead 2

What do you when your high school prom is over and you don’t want to go home yet? I’m wearing a tuxedo for the first time in my life (and looking pretty sharp, if I may say so myself), while my date is wearing a lovely blue dress. We’re in Times Square, the center of New York City, and all options (except bars, which required ID that we didn’t have and couldn’t show that we were of drinking age even if we did) lay before us. We could go to her favorite Greek coffee and pastry shop for some after-prom treats, but that’s near her house, and it would effectively signal the end of the evening. We got out late enough that we missed the last showings at the cinemas in Times Square, and who wants to watch a movie while wearing a tuxedo and a lovely formal blue dress anyway?

I did the only reasonable thing a teenager in Times Square could do: I took her to an arcade so we could play some video games.

While we definitely got some strange looks from the bouncer (which is a bad sign, if you think about it) at the arcade, we didn’t care because we were in our own little world that evening. I hadn’t really planned this far out, so I was left trying to figure out what game I could play with my date. Obviously, it would have to be cooperative; I wasn’t a huge fan of fighting games, and asking my date to play me in NBA Jam: Tournament Edition didn’t seem fair since it would be the first time she’s ever played it. I couldn’t find a cooperative side-scrolling game like The Simpsons Arcade Game, and I was burning precious goodwill with even proposing to go to the arcade, so I couldn’t dilly-dally while we were there. Then I saw the answer.

It seemed like the perfect option. It was moderately scary, so it would keep our adrenaline going. At $0.5 per credit, it wasn’t cheap to play, but it wasn’t disastrously expensive to a teenager like some of the other games were. And it was simple to explain: point the gun at the screen and pull the trigger to kill things.

I bought a few dollars worth of credits and we started the game. We cracked up when we had to defend ourselves against the dreaded green hopping frogs and teased each other when we accidentally shot the victims that we were trying to save. We got stuck at first stage boss like most people because hitting that flying goblin when it’s zooming around the stage is more difficult than most people would think. And then we were out of credits, and neither of us wanted to play any more. The actual act of playing didn’t last for more than 5 minutes, but those minutes stick out in my mind more than a decade after they happened.

Years later, I’m not sure that it was such a great idea, but it seemed like a good idea at the time. We eventually made our way to her favorite Greek coffee and pastry shop, and the evening eventually did end, even if it ended at five o’clock the next morning. Life moved on, and I hadn’t thought about The House of the Dead 2 for a long time.

All of this came rushing back when I saw a trailer for Namco Bandai’s new horror arcade game, Dark Escape 4D. The trailer showed a man and a woman playing a horror arcade shooter; the parallels to my experience with The House of the Dead 2 hit me square on the memory button. Judging by the trailer, by engaging the tactile, auditory, and visual senses and monitoring the players’ heart rates, Dark Escape 4D points to the promise that arcades hold: the ability to offer experiences that cannot be replicated by home consoles. Sure, I can reproduce the experience of playing The House of the Dead 2 with a Wii Zapper, a really nice TV, and a dark room. But there are some things that the home consoles can’t replicate, like the feel of using the rifle and the camera zoom in Silent Scope. Similarly, I wouldn’t be able to duplicate Dark Escape 4D without a serious investment of time and resources.

The question of getting our friends and family into sharing the joy of playing games is popular and frequent blog fodder. More often than not, the response involves helping the neophyte get over the mechanics of playing a video game these days because using two joysticks to navigate a world isn’t intuitive to everyone. Every time I see a writer address the question, I think of the time I played The House of the Dead 2 with my prom date that night, how quickly she was able to grasp the mechanics of it, but how quickly she felt finished with the experience. It’s not always a matter of mechanics; it’s a matter of investment.