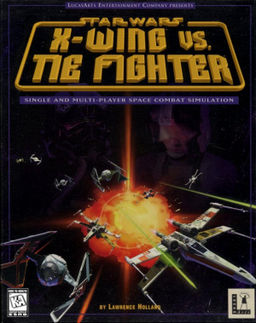 “Transfer laser power to shields and double rear shields. I’m going to take the one behind us out, and then I’m going to try to hit the other one with missiles.”

“Wait, damn it, don’t close the S-foils! Power to shields, not power from shields! Argh! I am never letting you co-pilot again!”

All things considered, X-Wing vs. TIE Fighter was a victim of expectations. My friends and I jumped became attached to LucasArts’ series of space sims with TIE Fighter when we passed a set of floppy disks around to install onto our computers. Then one of us got the CD-ROM edition of TIE Fighter, and we passed that around too. We still talk fondly about TIE Fighter and wonder why no one’s produced another Star Wars space sim like TIE Fighter.

At some point, one of us will inevitably remember that X-Wing vs. TIE Fighter came out and that we played it together one summer. Only one of us had a joystick and an air-conditioned room, so we would get together at his place. One of us would prefer to use keyboard and mouse, while another would prefer joystick. My preference was always keyboard and joystick, but that’s a lot of buttons to manage. So, I would normally ask one of friends to act as co-pilot. My reasoning was that Luke Skywalker had R2-D2; why couldn’t I have someone to help me pilot this fighter?

Of course, I didn’t take into account then was that my friends wouldn’t always follow directions or even act in our mutual best interest.

In vanilla X-Wing vs. TIE Fighter, our options were limited to arena battles, called “Furballs,” and we would compete to see who could down the most enemy fighters in a given amount of time. So, we would pass the keyboard, joystick, or mouse to each other and try to pull off the best and flashiest kills. The details escape me, but my lasting memory was cursing my friend’s name after he sabotaged our fighter as my round was running out. My friends couldn’t stop laughing; I couldn’t start laughing until weeks later when I got my revenge by shutting his fighter’s engines down so the computer-controlled fighters could easily pick him off. Good times.