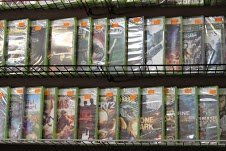 Grr! Where Are All the Games That I Don’t Have the Time or Money to Play?!!

This is a bit of a tangent, but it came to mind as I was watching the E3 presser reactions on Twitter over the past 24 hours.

Every time a new console launches, there is public outcry from gamers about the lack of games for it.

XBox 360, PS3, Wii, 3DS, Vita and now WiiU are just the examples from this generation. Despite promises from both Microsoft and Sony about their launches, I think we all know that at some point in their launch cycle, there will be a drought of new releases.

You know what? It’s not that big of a deal, people.

You could make the argument that it matters from a business standpoint, because of course having a robust library for your new console will help sell units. But most gamers act as if they are on the boards of these companies, getting up in arms about something that doesn’t even affect them.

A lot of gamers act as if they have unlimited money and time when they rant about this topic. Would I have liked the WiiU to have a better launch lineup? Absolutely. But the fact is, the only game I’ve completely finished for the WiiU so far has been ZombiU. I still need to finish New Super Mario Bros. U and LEGO City Undercover, and I’ve barely scratched the surface of Monster Hunter 3 Ultimate. Not to mention that I’ve got a slew of games from the eShop that I’ve barely touched. I’m not even ready for Pikmin 3 yet, whenever the hack it actually comes out.

And I don’t think I’m that far from the norm. Most of us don’t have the time and money to play everything. If the new XBox One launches with 27 games on day one, or even over the first three months, do you have $1600 and 270+ hours to play them between November and January? I’m going to go out on a limb and say that most gamers don’t.

So, who gives a crap if there are a slew of games at launch? You’re going to get two or three over the first few months and then grab the others for less moeny down the road, if at all.

So, everyone just settle down, okay?