I finally got a chance to play Dark Souls II at New York Comic Con this past weekend, and my anticipation for this game is now at a fever pitch.

The demo I played was the same one that was at TGS and SDCC, which featured the Mirror Knight as the area boss. The area begins at a bonfire and you quickly descend a ladder into what appears to be some sort of crypt or catacombs.

While I didn’t get a ton of time with it, I found Dark Souls II to be a great blend of familiar and new. Basic movement combat and item selection was the same, so I had little trouble jumping in and navigating the game. Where I found things to be pleasantly different however, was in the enemy encounters.

There are still plenty of enemies that you can take on one at a time, but Dark Souls II seems to take a more mixed approach in general. I found that most of my encounters involved two or more enemies, and frequently enemies of different types. Enemies also came from different directions, so I couldn’t take the same slow, plodding approach that most early playthroughs of Souls games required. The enemies were more cleverly designed as well, like the tortoise-armored brutes that would fall backwards on top of you if you tries to backstab them. 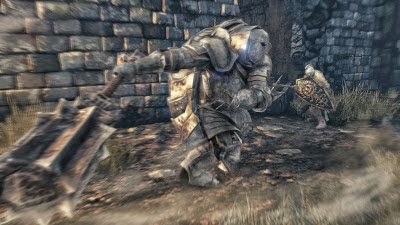 Another great addition is the torch mechanic. Dark Souls featured an area (Tomb of the Giants) where you needed to switch out your shield for a lantern in order to see (unless you had the Cast Light spell). In Dark Souls II, you carry a torch that you can light in certain places, as there are areas that are completely dark. This seems to be much more of a core feature in Dark Souls II, so the choice of using the torch or going in blind with a shield will be one you have to make more often. It adds a new layer to encounters, which also adds more tension.

Sadly, I didn’t make it to the Mirror Knight in my playthrough, as I had to step aside and let someone else play. But, in my short time with Dark Souls II, it was clear that the game still has everything I’ve loved about the series, as well as a new level of complexity to deal with. I cannot wait to sink hundreds of hours into this one come March.