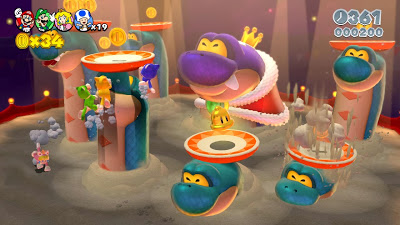 Despite the fact that the Nintendo booth at NYCC was jam packed for four straight days, I got a couple of chances to play Super Mario 3D World. The game is coming out on November 22nd, and it’s pretty much what you’d expect from a Nintendo Mario game–that is to say, it’s awesome.

One of the bigger additions to gameplay in this new Mario iteration is the Cat Suit. By grabbing a bell-shaped power-up, you gain the ability to scale walls and pounce on enemies. I love the scaling ability, as the level I played was wide open, and there were several ways to navigate it. There is a certain chaos to four players running around a 3D level, and the cat suit contributes to that chaos in a fun way.

And although it’s not unique to this Mario game, there’s so much to be said for the “pick up and play” accessibility of the game. Both times I played, I was with complete strangers, but the ability to just pick up a Mario game and know what to do seems ingrained into our DNA at this point. There’s really nothing else like it.

In my first play session I went through a standard level, but the second time was a boss fight. We faced off against a snake-like monster and his minions in a large arena. The boss battle was a combination of avoiding falling objects and platforming, and it was a ton of fun.

There’s really not much else to say except that Super Mario 3D world looks and plays great, and it should be a blast for the whole family when it comes out for WiiU in late November.