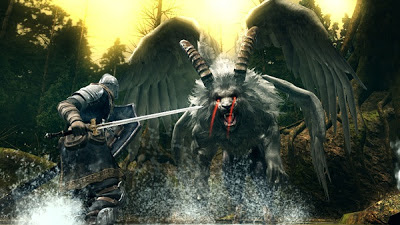 Postcards From the Abyss–Part 2: An Unfriendly Welcome

In the first thirty minutes of my time with the Artorias of the Abyss DLC, it already provided me with the best aspects off the Dark Souls experience.

Right off the bat–boss fight. As soon as I arrived in the new area, I ran into a fog gate, which means one of two things–either it’s your first time accessing a new area, or there’s a boss waiting for you. It was the latter, and what a boss to start with. A manticore called the Sanctuary Guardian pretty much destroyed me in my first encounter with it. A combination of charge attacks, lightning bolts and a vicious tail whip did me in. For my second attempt, I summoned in a couple of good samaritans and between the three of us, we took down the Guardian. I also got a sweet whip weapon for taking off the Guardian’s tale. Bowing to my anonymous friends, I soldiered forth as they returned to their home worlds.

After stopping to rest at the creepy but beautiful Oolacile Sanctuary, I crossed a bridge and entered the Royal Wood. I was immediately faced with a couple of Scarecrows, which i dispatched. I didn’t have long to pat myself on the back however, as I was then invaded by another player. 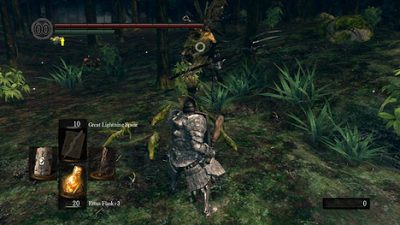 And such is the double-edged sword that is summoning in Dark Souls. You have to be in human form to summon allies into your game, which I did in order to defeat the Stone Guardian. But, walking around in human form also leaves you open to being invaded. It’s this type of risk-reward proposition that makes Dark Souls so exciting.

Anyway, back to the invader. He (or she) was a savvy player, and I almost fell into the trap he was setting. He used ranged crossbow attacks to bait me into chasing him farther into the Royal Wood. Not being familiar with the area, I didn’t realize there were giant Stone Guardians roaming that area, which he attempted to lead me into. I retreated just in time, and then a twenty-minute cat and mouse battle ensued. Seeing that I wouldn’t fall for the trap, my invader then poisoned me and tried to wait me out. I summoned an ally in, which he led into the Stone Guardians and an untimely death. I then drew him closer to me, where he still attacked via crossbow and tired to retreat whenever I got close.

At one point, I backed him into a corner and got a few good licks in, He then used Humanity to heal himself back up, and we started the dance all over again., He had actually worn me down to one Estus Flask (healing potion) left, when I finally defeated him with a couple of halberd strikes. It was a pretty epic battle, and a very rewarding victory.

All in the first half hour of my time with the new DLC.

Dark Souls, I love you.