Postcards From the Abyss–Part 4: Here There Be Dragons (Well, Just One, Actually)

I cannot tell you how much I love the new Artorias of the Abyss DLC. All of the areas and bosses have been interesting, no more so than the final two bosses. I’m going to talk about them in order, but I actually fought them in reverse order.

Black Dragon Kalameet is a giant undead dragon that inhabits the valley between Royal Wood and Oolacile. In order to even fight him, I had to go interact with an NPC named Hawkeye Gough, one of the four Knights of Gywn, and a Greatarcher, a group who used to fight Dragons. When you interact with him, he helps you by wounding Kalameet with a great arrow so that he can’t fly. You then proceed down into the valley to fight him.

Having scoped out Kalameet, I knew I would need help with this battle. I actually let myself be summoned into others’ games a few times so I could face off against the dragon and hone my strategy. I’m a melee-based character with heavy armor, so evading isn’t my strong suit. I needed someone to keep the focus off of me so I could get close and do some real damage. So, I enlisted a couple of summoned characters to assist, and into battle we went. My preparation had paid off, as I knew Kalameet’s patterns when I faced him in my world. He has breath weapons that uses both in an arc, and in a concentrated blast by jumping up and firing directly below himself. He also uses head and tail swipes as his primary melee attacks. He also has a vicious telekinetic attack that results in you being susceptible to double damage for a time. I knew enough to avoid that one due to previous deaths at the hands of it. 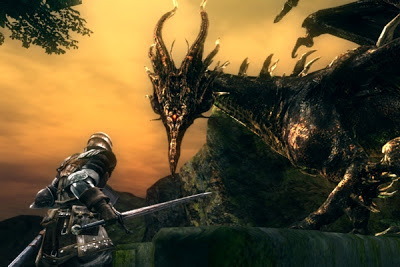 The strategy was fairly simple–I needed the other players to distract Kalameet with ranged attacks so I could get in and use by Black Knight Greataxe. The great thing is, the other players knew this. Because there’s no voice chat in Dark Souls, you need to pay attention to what you can see from other characters. I chose to summon one character who was a spellcaster, and one who looked fast but used melee weapons. Since I’m slow but pack a lot of punch, they complimented my character well.

The battle played out according to plan. The spellcaster fired Soul Arrows and Soul Spears (magic missiles for you D&D fans), the other character dodged and struck, keeping the attention focused on him (or her), and I was able to land enough big shots to take the dragon down on the first attempt. We also managed to cut off its tail, and I was rewarded with an obsidian greatsword, a cool looking weapon that served as an alternative to my greataxe for awhile.

Kalameet is a really fun boss to fight, and I went back at least a dozen times to fight him with others before finishing my playthrough.

Next time I’ll recount my battle with the big bad of Artorias of the Abyss–Manus.