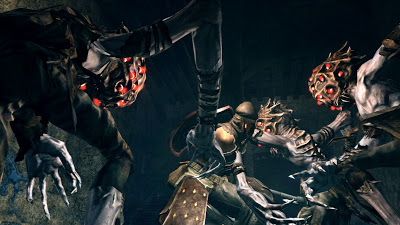 Postcards from the Abyss–Part 5: Oolacile and Chasm of the Abyss

The primary boss of the Artorias of the Abyss DLC is arguably the best boss fight in the entire game. Before I could even face off against him, however, I had to get to him. And that was no easy journey.

One of the primary tenets of Dark Souls is that you will die–a lot. So, you want to make sure that each trek into an area has a purpose, so you’re not just wasting time. Scouting runs are common. There are also times when you know you will die in a certain area, but you’re trying to get a particular item, so it’s worth the suicide run. Items stay with you after you die, so running into certain death to grab that weapon you want is worth the extra time you’ll spend retreading through an area later.

The other reason to go on a suicide run is to unlock a shortcut that can be used later to bypass most of the level. That was my primary purpose in heading into the Oolacile Dungeon. I used up most of my Estus Flasks (healing) and a good bunch of pyromancy spells along the way to unlocking the shortcut, because I knew I wouldn’t be going on to fight the boss right afterward.

The enemies in Oolacile Township and in the dungeon are pretty tough, and also some of the more interesting in the game. The main grunts are called Bloatheads, twisted former citizens of Oolacile that have been warped into creatures with eye-filled heads and oversized arms. Their arm swipes can break your guard, so taking them one at a time is preferable. There are also Bloathead Sorcerers, who fire ranged attacks at you while the the others try to beat you to a pulp.

I fought through several pockets of the Bloatheads before coming to the shortcut area, which allows you to take an elevator down from a point right near the bonfire you spawn at. Once I’d done that, I had to fight through another half dozen Bloatheads and then face off against an enemy called the Chained Prisoner–a brute that carries a ball and chain, as well as the pole he was chained to. He uses sweep and charging attacks, so evasion and ranged attacks work best against him. I blasted away with fireballs while trying to stay out of his way (sometimes unsuccessfully), and I managed to take him down. From there, it was a short trip to another bonfire, and then the final part of the level, the Chasm of the Abyss.

Chasm of the Abyss, is a fantastic and challenging area. For one, it’s steeped in darkness. Visibility is limited, and the initial part of the level is crawling with Bloatheads. There are also a ton of ghostly creatures called Humanity Phantoms lurking throughout the level, and their touch drains life from you pretty quickly. They cannot be blocked, so I avoided the ones I could, and tried to dispatch the others quickly. They attack in groups though, so I died a couple of times just trying to get through them. 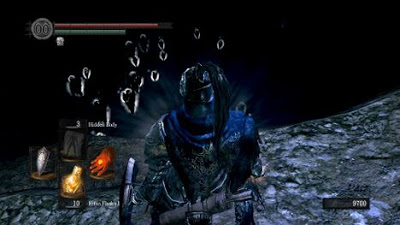 As is often the case, I made a few exploratory runs into the level, learning and dying along the way. When I thought that I had a pretty good understanding of the layout, I became human and summoned a couple of players into my game. Things started out great, as my two guardian angels started making short work of the Bloatheads and most of the Humanity Phantoms. We even rescued the soul of Sif, the Great Wolf, which then allows him to be summoned for the final boss battle. As we were doing so though, I got the message that I had been invaded. What followed was one of the most surprising deaths I’ve had in the game.

I kept waiting for the invader to appear, but he didn’t–until just the right moment. We had made it almost to the end of the level, and we had to descend a fallen pillar, balancing on the thin pathway to get down to the fog gate and the Manus fight. Out of nowhere, the invader snuck up behind me on the pathway and blasted me with a magic attack from behind, knocking me off the pillar and sending me to my death. I screamed and laughed the same time, as I was so close, yet that was such a great kill on his or her part.

Lucky for me, when I respawned at the bonfire, I was able to summon two other players into my game again, one of whom had just been with me when I got ambushed. We moved through the level pretty quickly and made it to the fog gate for the showdown with Manus, which I’ll talk about next time.