Postcards from the Abyss–Part 6: Oh, Manus

Having made it through Oolacile Township and the Chasm of the Abyss, it was time for me and my two anonymous compatriots to face off against the big boss of the’ Artorias of the Abyss DLC–Manus, Father of the Abyss.

Manus is an absolute beast of a boss, and maybe the best boss fight of the entire Dark Souls game. As you enter his lair, a cut scene triggers that is creepy as heck, as you are grabbed by a giant ghostly hand and thrown down into his arena, where he slowly steps out of the shadows. He’s got one giant ghostly hand that he uses for long-range melee attacks, and he wields a staff in the other that he uses to rain dark magic down upon you with. For me, the first key to this battle was staying alive until my colleagues arrived, as there is a slight delay due to them having to go through the fog gate as well.

The battle begins with a lot of melee attacks, and the key for me was trying to stay out of range early, until I figured out the attack patterns. While the two other players distracted him, I was able to summon in Sif the wolf to aid us. Bringing Sif in is more of a novelty, as he doesn’t do a lot of damage and his main purpose is to distract Manus so you can attack. 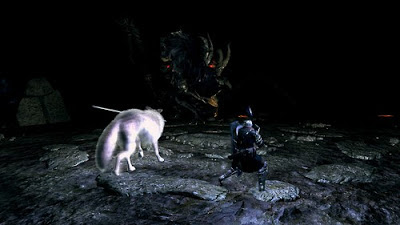 I don’t have great ranged attacks, so I had to get in there with my Black Knight Great Axe and try to do some damage without getting caught in Manus’ sweep attacks. One of the players with me was a spellcaster, so they hung back and slung spells from afar while the other player and I whittled away at Manus’ health.

When his health dropped to about half, Manus changed tactics and started using magic primarily. One particularly nasty spell is Dark Rain, where he showers part of the arena with dark magic meteorites that are tough to dodge. luckily, I had gotten an artifact called the Silver Pendant earlier in Oolacile, which creates a temporary shield against dark magic. My strategy then became using the shield during magic attacks, and then running in to get a few hits in on Manus. My colleagues used pretty much the same strategy, and we eventually took Manus down. I was rewarded with 10 Humanity and 60,000 souls for the victory.

Overall, Manus is a blast to fight (if you have a friend or two along), and is easily one of the best bosses in the game. In fact, Artorias of the Abyss as a whole might be the best area in the entire Dark Souls game, which is high praise. It’s rare for DLC to live up to the quality of the main game, and even rarer for it to surpass the main game, but Artorias of the Abyss is some of the best add-on content I’ve ever played. if you’re a Dark Souls player, don’t hesitate to shell out the $15 for this content.

Side Note: There and Back Again
After spending so much time with Artorias of the Abyss, I was once again completely hooked on Dark Souls. I needed to finish the rest of the game with my character, and so I did.

After beating Manus, I went to New Londo Ruins, battling through the ghosts that inhabit the lace and then on down into The Abyss to take down The Four Kings. From there, it was back to the Duke’s Archives and the Crystal Cave to fight the white dragon Seath the Scaleless. From there, I trekked back to the Catacombs (via Firelink Shrine) and onto the Tomb of Giants to face Gravelord Nito. Finally, I traversed the Demon Ruins, taking down the Ceaseless Discharge and the Demon Firesage on my way to Lost Izaltih.

After defeating the Bed of Chaos, I had all of the Lord Souls I needed to unlock the patch to the final boss–Lord Gwynn. I took him down as well, finishing the game for the second time, and I immediately started on New Game+ with the same character.

As of right now, I have over 200 hours logged into Dark Souls. I just started a third character, a faith build this time, and I’ll be discussing that playthrough in a new series entitled Defenders of the Faith. Stay tuned!