I was pretty bummed to hear about the closure of Sony’s Liverpool Studio this week. While they are primarily known as the studio behind the WipEout franchise nowadays, Sony Liverpool has a long and storied history that dates back to the early days of PC. Before they were rebanded in the early 2000’s, Sony Liverpool was known as Psygnosis, and they made some amazing games.

Of all the games that Psygnosis either developed or published, my favortie is their first one–Brataccas. Brataccas was a science fiction RPG in which you played a genetic engineer named Kyne that has developed a way to create super humans. When the government wants to use the technology to create soldiers, Kyne refuses and is branded as an enemy of the state. In order to clear his name, Kyne has to travel to a mining colony on an asteroid called Brattacus and gather the evidence that will prove he’s been framed. 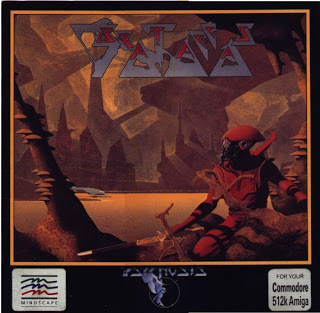 The project rose from the ashes of the infamous Bandersnatch concept that Imagine Software was planning to release as one of its “Megagames.” When Imagine went under, some of the key people from the studio formed Psygnosis. Brataccas was what became of Bandersnatch.

When Brataccas came out for the Amiga in 1986, it actually got mixed reviews, mostly because the controls were pretty wonky and it was very buggy. But if you could get past those things (and I did), the game was absolutely amazing. It had an oppressive atmosphere that really got across the idea that you were in a remote place with everyone out to get you. The way the game displayed one room at a time on screen (kind of like Xenophobe) had me always worrying what was around the corner. When I did run into an Asteroid Belt Policeman (ABP), the encounters were quick and deadly. There was never a point in the game where I didn’t feel like it was a race against the clock to find the evidence I needed before the bad guys caught up with me.

When I think of games that really nailed a sense of atmosphere, I would put Brataccas in the same group as Out of this World and Flashback. There is a feeling to those games that is rarely captured even in today’s era. In fact, I think the original Dead Space is the only one of the past several years that gave me that sort of experience.

The video below gives a great overview of the game, and if you want to see the actuall manual from back in the day, head over to the site dedicated to Brattacas.

Maybe in the wake of Sony Liverpool’s closure, Psygnosis will someday live again. I wish all the people affected by the closure the best of luck.