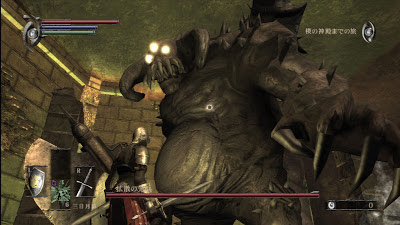 My love affair with Dark Souls is well documented her on Co-Op Critics, but I spent a great deal of time with its predecessor Demon’s Souls as well. So, when Demon’s Souls became free for PlayStation Plus members at the beginning of April, I decided to return to the game for a new character and a new playthrough.

Back when I originally completed demon’s Souls my first character was not very well defined. I hadn’t done a lot of research going in, so instead of having a build in mind, I just kind of built a “Jack of All Trades” type character. That worked okay in terms of beating the game the first time around, but as soon as I stepped into New Game+, my lack of specialization really started to become a weakness.

For this new playthrough, I’m focusing on spellcasting, primarily magic, with a few miracles for healing thrown in. I started with the Royal class, as the Soul Arrow spell (basically Magic Missile) is very useful when you’re at low levels. In terms of physical combat, I’m really trying to focus on dodging and parrying, so I’ll be wearing little to no armor, and sticking with my rapier, or a similar weapon.

After creating my character, I jumped into the tutorial and then fought was is essentially the tutorial boss, Vanguard. The fight is designed to kill you, as that is the means through which you travel to the Nexus, the home base of Demon’s Souls. You can allegedly defeat Vanguard, but it’s damn near impossible, and I didn’t last more than a few moments before getting squashed.

That encounter was a great wake up call to the differences between Demon’s Souls and Dark Souls (and there are many). I had been spoiled in my 200+ hours of Dark Souls, especially by the checkpoint system. While there are definitely shortcuts you unlock as you make your way through levels, in general, you have a lot more ground to make up in Demon’s Souls when you die than you do in Dark Souls. On the combat front, the lack of “poise” in Demon’s Souls means you get stunlocked with a lot more frequency. Overall, Demon’s Souls just seems much less forgiving to me than Dark Souls.

There are a lot of things I like better about Demon’s Souls, though. The story is much more coherent than in Dark Souls, and the world of Demon’s Souls feels more alive to me than Dark Souls does. The enemies are more interesting, from the number of actual human beings you see, to the Mind Flayers in the Tower of Latria–there’s so many cool enemies in Demon’s Souls. Some of the boss battles are really memorable as well. One of my favorites is the Tower Knight which I’ll talk about in another post), because it takes place on multiple levels and features a few different elements.

All in all, I’m excited to be jumping back into Demon’s Souls, and I’ll be posting a few more times about this playthrough. That doesn’t mean I’ll be neglecting Dark Souls, however. Between these two games, I may not have time to play anything else.