Return to Demon’s Souls–Part 2: The More the Merrier

Probably the biggest difference in my current playthrough of Demon’s Souls as opposed to the original is my participation in the multiplayer aspects of the game. The first time I played Demon’s Souls, my multiplayer experiences were limited to being invaded by the occasional Black Phantom.

Having spent over 200 hours with Dark Souls (many of them in multiplayer) has really changed my approach to Demon’s Souls this time around, though. Because Demon’s Souls doesn’t have Humanity like Dark Souls, reviving to human form is a little more precious. You do find stones that will revive you to human form, but they’re nowhere near as abundant as Humanity is in Dark Souls. The most consistent way you revive in Demon’s Souls is by beating bosses. 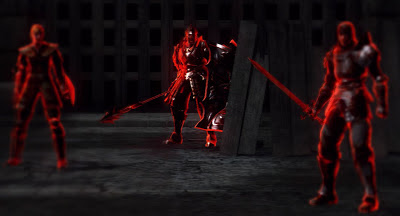 I’m about a third of the way through the game now, and I’ve summoned players in a handful of times, making boss fights much easier. What I’ve done a lot more though, is made myself available for summoning into others’ worlds.

What’s cool about the summoning in Demon’s Souls is that you actually rate the other player after you beat a boss. When someone looks at your summon sign later on, they see how many matches you’ve participated in, and what your rating is. So far, I haven’t seen anyone really abusing this by trolling people with low ratings, and the system is a great way to thank someone for coming in and helping you through a difficult part of the game.

Outside of summoning, I have had my share of invasions so far, and I’ve had some amazing battles. The other day I was invaded in the Shrine of Storms level (luckily I’d cleared out the steel skeletons before that happened), and the ensuing battle was about ten minutes long. We both switched back and forth between spells and weapons, each getting the other near death several times. I ended the battle with a well-timed roll and sword attack, finishing the invader right before they landed a blow that would have taken my last sliver of health. It’s these kind of battles that make the Souls series so memorable.

That brings up another big difference between Demon’s Souls and Dark Souls–the ability for summoned or invading players to consistently heal themselves during co-op or PvP. In dark Souls, players have to use Humanity or miracles to heal when summoned or invading–Estus flasks don’t work. In Demon’s Souls, you can use the healing grasses to regenerate health as much as you want. This makes for longer PvP battles, as well as an increased chance that a summoned player will survive a level or boss encounter with you. It’s another area where I prefer Demon’s Souls over Dark Souls.

Next time I’ll be discussing some of my favorite locations in Demon’s Souls, especially the mind-flayer populated Tower of Latria.