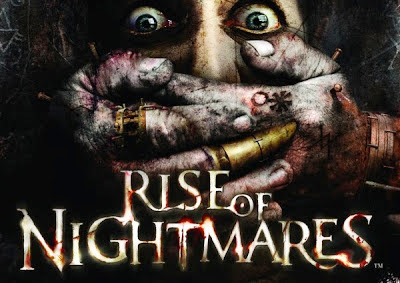 Rise of Nightmares–Kinect’s Most Underrated Game

If you’re an XBox 360 owner, do you have a Kinect? Maybe you bought into the hype around the Kinect when it first came out, and thought there would be a ton of games for it, so you picked it up. Maybe you just got one for Christmas. Or maybe, like me, you’re a parent who traded in the Wii and got the Kinect figuring you could have your regular gaming experiences and have some fun with the family all with one console now. In any case, there certainly hasn’t been a ton of great Kinect games since the peripheral launched, and it’s now been re-branded as more of a navigation tool and an augmentation to other games, rather than a platform for games specifically designed for it.

There have been some pretty cool games to come along for Kinect though, and one in particular I was reminded of recently. If you didn’t read Kim Wong’s House of the Dead 2 post from a couple weeks ago, you really need to, as it’s a great game and he’s got a great story to go along with it.

Anyway, Kim’s post got me thinking about Rise of Nightmares, the Kinect game that SEGA released a little over a year ago. The game was pretty much dismissed by critics, and never really got a lot of coverage. That’s a shame, because it was a blast to play, and anyone who has a Kinect and liked the HotD series should absolutely check it out. Rather than reprint the whole review that I did over on Secret Identity last year, here’s a snippet:

“Combat is where Rise of Nightmares shines. Without a weapon, you can punch and kick zombies into submission, and the Kinect does a fine job of recognizing your panicked, flailing movements. Weapons are more fun however, and there’s a lot of them in Rise of Nightmares. Pipes, machetes, throwing knives and chainsaws are some of the instruments of destruction you get to wield. Most of the weapons feel pretty unique when you use them–the pipe feels like a bludgeoning weapon, while you “guide” the chainsaw through the decaying meat of the zombies’ bodies (that never gets old).”

You can read the full review over on Secret Identity, and you can check out a couple of great trailers for Rise of Nightmares below. You can grab the game for less than $20 now, and it’s absolutely worth your time.