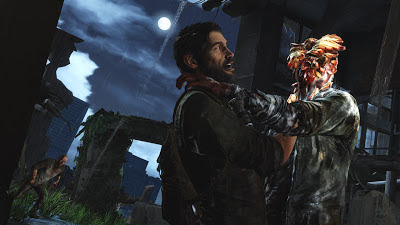 The Last of Us–Combat Takes Away From a Great Story

I recently raved about how amazing the opening to The Last of Us is. In fact, the storytelling and voice acting has been consistently great in the several hours I’ve put into the game so far. The story elements of The Last of Us actually transcend what we are used to as “video game stories.” I genuinely care about the characters, and when I’m playing through an area, I am constantly looking forward to the next little tidbit of story that I’ll get to watch.

And that’s kind of the problem. In my experience so far, I’m not really enjoying the actual gameplay of The Last of Us. More specifically, I kind of hate the combat systems altogether.

The Last of Us teaches you to approach combat in a certain way–avoid it whenever possible. Your character (Joel) has a kind of radar sense, where he can listen closely to an area and discern where the enemies are. By using objects in the environment (bottles, bricks), you can distract enemies and lead them away from the path you need to take to escape an area. In general, it is preferable to do this, both because of the lethality of enemies, as well as the scarcity of weapons and ammunition. Certain enemies can one-hit kill you. You’re basically taught that if you do have to kill, do it stealthily (shiv to the neck), and only kill who you have to to get away. Guns attract enemies and are really only a good option when you’ve already screwed up, or you’re being attacked by large numbers. When you do use your gun, it’s inaccurate, as Joel’s shaky hand means you’ll be missing your target around a third of the time. Not good when you’re already low on ammo.

So, to summarize–your goal is to get Ellie (the young girl you’re protecting) from point A to point B as quickly and safely as possible. Avoiding combat is the best way to do that.

Sadly, the game spends a lot of time teaching you this golden rule, and then violating it on a frequent basis with unavoidable combat against large numbers of enemies. These moments are scripted, and you must kill all enemies before the game will move forward. 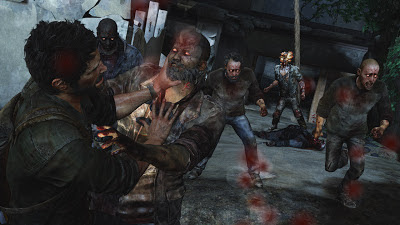 Every time I have died in The Last of Us has been during one of these unavoidable combat encounters. The clunky mechanics and lack of ammo combined with swarms of enemies that are designed to be taken one at a time result in a frustrating experience that takes me right out of the narrative. There’s nothing worse than a great character moment followed by having to repeat a maddening encounter several times.

I can’t imagine the combat systems will improve as the game goes on, as this seems to be the pattern so far, and I a decent ways into the game. If I wasn’t so interested in Joel and Ellie as characters, I’d have stopped playing by now. I almost wish someone would just pull out all the great story bits and moments of dialogue and string them together in a movie I could watch on YouTube.