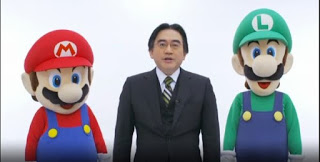 The Nintendo 3DS Is Enjoying An Embarrassment of Riches Right Now

After a rough launch two years ago, the Nintendo 3DS has emerged as one of the strongest consoles of this generation and right now, it may be the best console on the market. Of course, that’s just my opinion, but for a console that just launched in 2011, the 3DS had an amazing software lineup, and the next year is looking fantastic as well. In the US alone, the 3DS has sold over 8 million units, which is a better pace than the original DS set in its first two years.

In the past two months, Fire Emblem Awakening (240,000 units in US), Monster Hunter 3D Ultimate and Luigi’s Mansion: Dark Moon (415,000 units) have all had strong launches. Animal Crossing: New Leaf is coming in June and will likely be a huge hit on the 3DS as well.

In yesterday’s Nintendo Direct, a slew of new 3DS games, as well as upcoming virtual console releases were announced. Mario Golf: World Tour, Mario & Luigi: Dream Team, a new Mario Party, a new Yoshi’s Island, Donkey Kong Country Returns 3D, the latest Professor Layton, and a sequel to Zelda: Link to the Past, are all planned for release this year.

On the virtual console and eShop front, two Zelda GameBoy games (Oracle of Ages /Oracle of Seasons) are coming in May, three new Level-5 games are on the way and the acclaimed Bravely Default: Flying Fairy from Square Enix is coming later this year. It’s already been a great year for the eShop, with games like Crimson Shroud, Cave Story, Crashmo, and Tokyo Crash Mobs, to name a few. The virtual console offerings are robust as well, especially if you were part of the Ambassador Program. Even in just the last few months, NES gems like Ninja Gaiden and Zelda II have arrived, adding to a huge collection of classics that are already available.

It’s really an amazing time to be a 3DS owner. There is a great balance of classic and new games available for the console, and with gems like Liberation Maiden and Crimson Shroud, well-known developers are flexing their creative muscle with downloadable titles that are a perfect fit for the handheld.

If there’s one negative about how awesome the 3DS is doing right now, it’s that the WiiU’s struggles seem even greater by comparison. If there’s one thing Nintendo proved with the 3DS though, it’s how to recover from a poor start. Let’s hope they learn some lessons from the 3DS soon.