The Wii U Makes a Fun First Impression

So, I bought a WiiU this past weekend. I held out for awhile, but my desire to play ZombiU, as well as the idea of playing Nintendo Land with my kids proved to be too much to resist. And while I haven’t spent a ton of time with the system yet, it’s made a very good first impression on me. Much like the original Wii, Nintendo once again made a console the whole family can enjoy, where fun and accessibility are what drive the design of everything.

This past Sunday morning, I fired up the WiiU and sat down to play Nintendo Land with my six-year old son. I had downloaded all the updates the night before (and they are some PS3-style mammoth updates), so we first jumped into the Mii Maker app. I had my son go get his his 3DS, and we imported his Mii from the handheld onto the new WiiU. The process was simple, and my son loved watching the his Mii jump out of the screen on his 3DS and land in our TV on the WiiU. That’s a great example of Nintendo’s approach–even something little thing like importing your Mii needs to be cute and fun.

The it was on to Nintendo Land  There is definitely a Wii Sports vibe to the collection of minigames, as they serve the purpose of familiarizing you with the console’s features while creating a group gaming experience that’s easy to pick up and play. Nintendo Land is more than what Wii Sports was, though. The games are more substantial, the nostalgia of Nintendo franchises is woven throughout the game, and the WiiU GamePad creates a whole different dynamic, as the player with it often has a completely different role than the Wiimote-using players.

The tour guide of Nintendo Land is a robotic monitor named Monita, who explains the basics of the game. By playing the Nintendo franchise-themed games, you earn play coins that are used to unlock items that you can decorate your Nintendo Land theme park with. Of the multiplayer minigames we played (there are single player ones as well), Takamaru’s Ninja Castle was my son’s favorite. In the game, you swipe the GamePad touch screen to throw ninja stars at waves of ninjas as you try to save a princess version of Monita, who’s been kidnapped. 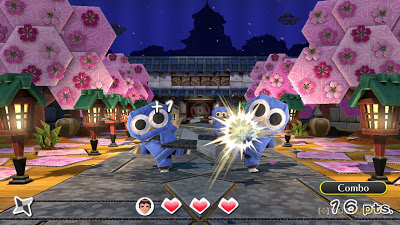 My favorite was Luigi’s Ghost Mansion. The game makes great use of the GamePad, as the player using it is the ghost, who chases the Wiimote-using players around different floors of the mansion. The ghost is invisible, only appearing on the TV when a player shines their flashlight on it. But the GamePad user who is controlling the ghost can see his character as well as all the players on the GamePad screen. Each round is a maximum of five minutes long, and up to five people can play together. It’s a blast.

My first couple of hours with the WiiU have been great, and served as a reminder that I don’t want the WiiU to be like the Xbox 720 or the PlayStation 4. Nintendo has always been comfortable creating their own space in the gaming hobby, and they seem to be the only one of the big three really interested in being accessible to younger and casual gamers. Those of us with kids appreciate that, and for the gaming experiences that the WiiU can’t provide, there are other options out there.

P.S. I’ll talk about ZombiU after I spend some more time with it, but I will say that the similarities to Demon’s Souls/Dark Souls jumped right out at me, as my first character did not even survive the game’s introduction.