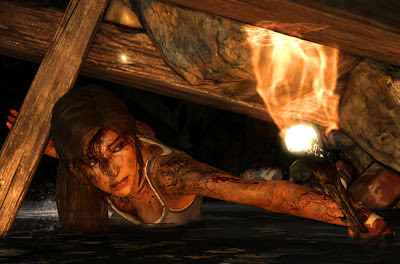 Recently I wrote about how much the opening of The Last of Us grabbed me and got me invested in the world and story of the game.

I picked up Tomb Raider during the Steam Summer Sale and started playing it the other night. Turns out, that game has a pretty great opening as well. But where The Last of Us did a great job of keeping you in the moment during its opening, Tomb Raider constantly pulled me out of its opening.

From a story standpoint, Tomb Raider’s opening is immediately interesting. Through a series of quick-cut scenes, you see a young Lara Croft become shipwrecked on a mysterious island, where her life in put in peril immediately. As you take control of Lara, you’re tasked with trying to find a way out of a series of underground caverns, as things are collapsing around you and you run into some of the dangerous inhabitants of the island. It’s actually a great tutorial, as you learn the basic controls while navigating your way out.

But the quick-time events, man.

I’m not anti-QTEs at all–I grew up on Dragon’s Lair for crying out loud. When used well, quick-time events can be very effective. I enjoyed how the Mass Effect series had character moments (Paragon and Renegade) that could be activated by a trigger press at certain times. I enjoyed the hacking minigame in the first Mass Effect. In Gears of War, the idea of a timed button press to reload your gun faster and get a damage bonus is great. Telltale’s The Walking Dead also had some interesting implementations, particularly when fighting off a zombie that had grappled you.

In general, the QTEs that I hate have two components: (1) To fail is to die instantly, and (2) There is little to no margin for error.

Such is the case with many of the QTEs in Tomb Raider. There are a handful of points during Lara’s escape where the QTEs require exact timing. Worse, rather than a button press, they resort to wiggling the analog stick back and forth. A second too early or too late, and Lara gets killed in a horribly grisly manner.

So, as I played through the opening that featured an interesting story, there were places where I continued to die gruesomely several times, pulling me right out of the story before the title credits had even appeared. I had already lost some of my investment in the game by then. 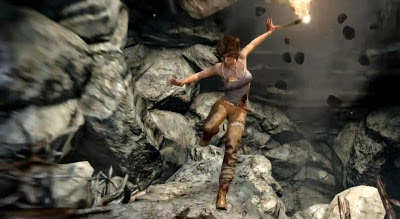 Now, I did say in the title of this post that the game also featured the “best” of what QTEs can be used for, and there is one particularly good implementation in the opening Tomb Raider. At one point, Lara is scrambling from an underground cavern toward daylight, and you are actually using the right and left triggers to help her claw her way up a muddy, slippery slope. It reminded me of the scene in the original Modern Warfare when your chopper goes down and the soldier you control is crawling hand over hand amidst the wreckage. That kind of implementation really connects you to the moment.

When QTEs are used well, they add to the experience. The opening of Tomb Raider could have kept the QTEs,but made them much less punishing (at least during the intro of the game), and the effect would have been much more dramatic and rewarding.

You can watch the opening chapter of the game below, if you don’t mind the spoilers.