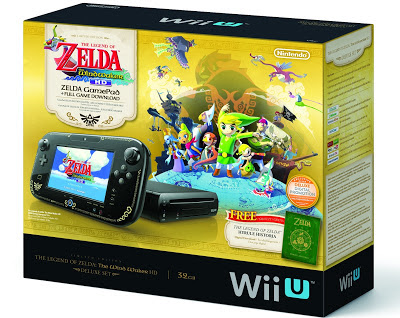 Nintendo announced this week a $50 price drop for the deluxe version of the WiiU. This price drop will take effect on September 20th, the same day the new Legend of Zelda: Wind Waker HD bundle comes out. Even better, the Wind Waker HD bundle will also retail for $299, and will include a Zelda-themed GamePad, and a digital version of the Hyrule Historia compendium, which, if you haven’t seen it, is amazing.

So, the price drop puts the full-fledged version of the WiiU at $299. The PS4 will retail for $399 and the XBox One for $499. From a price standpoint, I feel like WiiU would be better priced at $249, but the fact that Nintendo has now aligned the console at $100 bucks cheaper than PS4 and $200 cheaper than Xbox One is a great thing. There are now clearly three options out there, and for those who are making the choice based primarily on price, there is at least now a marked difference between Nintendo and the other consoles.

The Zelda bundle is a no-brainer if you are even considering getting a WiiU. Hyrule Historia alone launched at $35 and is an amazing tome. Throw in the game and the special controller, and that’s a great package.

As much as the WiiU’s lineup of games has been maligned, by the time the other two new consoles launch, WiiU will have a pretty nice stable of games. We already have Nintendoland, LEGO City Undercover, Pikmin 3, New Super Mario Bros. U and Super Luigi U, ZombiU, Monster Hunter 3 Ultimate and Game & Wario among the more notable titles. Wonderful 101 and Rayman Legends are just around the corner, with Wind Waker HD and Scribblenauts Unmasked (the DC Universe Scribblenauts game) following right behind. All of those games are either out now or will be by the time the next PlayStation and Xbox consoles launch. Not too shabby.

So yes, Nintendo completely squandered the year long head start it had to build WiiU momentum. And the third party support is as bad as we all feared it would be. BUT, the price drop will help overall sales, and there are plenty of great games out now and coming in the near future to make the WiiU a worthwhile purchase.

The biggest question for Nintendo now is whether or not the WiiU price cut was too little and too late. There is no question they should have either priced the console lower at the start or cut the price as soon as the game drought hit. Whether this move turns the console’s fortunes around remains to be seen, but I will never doubt Nintendo’s ability to turn things around after what they did with the 3DS, which is now blowing the doors off every other console in terms of sales.

There are still a couple of things I’d like to see Nintendo do that I think could go a long way to helping speed the recovery of the WiiU. For starters, an Ambassador Program for early adopters would be nice, similar to what Nintendo did with the 3DS. Building in more interactivity between the 3DS and the WiiU (like remote play or using the 3DS as an alternate controller) would be great as well. But I think the biggest thing Nintendo needs to work on with the WiiU is its implementation of the GamePad. Outside of ZombiU, Nintendoland and LEGO City Undercover (to a much smaller degree), hardly any games take advantage of the functionality of the GamePad. It’s one of the defining factors of the console, and it’s sorely underutilized.

For now though, I’m happy that the price cut has finally arrived, the games are starting to pile up, and a new bundle is on the way. Here’s hoping it’s enough to get the WiiU back on track for this holiday season.