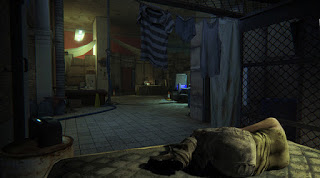 If I had to describe my first couple hours with ZombiU in one word, that word would be “intense.” My first character (John) died within two minutes of beginning the game, as you open ZombiU by running for your life through a London subway station to get to the safehouse that serves as the main hub. I wasn’t quick enough, as I was fumbling with the controls (“Which one is the climb button–AAGHHH!”), and a mob of zombies pulled me down from a ladder as I was trying to scramble into an air vent.

Not since Demon’s Souls has an opening gut-punched me like that. ZombiU puts you on notice immediately about several things:

1. You will die in this game, but you will learn something from each death;
2. Pay attention to everything around you;
3. Every single enemy is deadly (one bite kills you);
4. Only run when you have to–otherwise, take it very slow;
5. Use every tool at your disposal.

The comparisons to the Souls series are apt, as ZombiU is a challenging game whose systems you must master to be successful. And like the Souls series, the game is very atmospheric, and you are in a constant state of near-panic, wondering what is around every corner. There is also a messaging system that is not unlike what you’d find in a Souls game, and retrieving items from your corpse works in a similar way (except that your corpse becomes a zombie in ZombiU). But while the Souls series revolves around combat, ZombiU revolves around survival, which means avoiding combat in many cases, since one bite equals death.

Despite the game making a great first impression however, it wasn’t until my second character died that ZombiU really got its hooks into me. Maybe it was the way that character died, or the fact that I had spent some time with her inching my way through the first hour of the game, but Sarah’s death (that was her name) was the one that got me. We (Sarah and I) had made our way to the marketplace, carefully engaging the few zombies we had to, avoiding the ones we didn’t and scouring the area for supplies. I made it to the back door of the supermarket, and the door was alarmed. As soon as I opened it, a zombie lurched out at me, and a few others came shambling from the parking lot. Panic took over as I tried to fight up the steps toward the door, knowing death was all around me. I was so tantalizingly close to surviving, as I managed to get the door closed behind me, but I trapped two zombies in the small room with me, and I wasn’t quick enough with my cricket bat to take them both down. I felt like I failed Sarah–I could have taken out one more zombie outside, and probably secured the door, if I just hadn’t panicked. But that’s what ZombiU is really good at–making you panic.

My next survivor Toby woke up in the safehouse, and my first priority was to track down Sarah’s zombified corpse and get my gear back.

Tune in next time for Toby’s tale of survival (or horrible death).