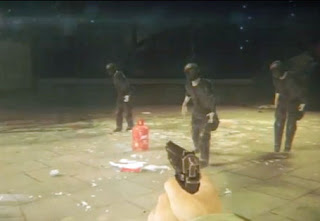 After Owen made it to St George’s Church in an attempt to rescue other survivors, he had been jumped and knocked unconscious. When he awoke, he was trapped in a cage, and the courtyard of the church had been barricaded off into some type of arena. Over the intercom came the voice of a twisted game show host, who explained that our only goal was to survive. As the cage started to rise, I realized we had no gear at all. I also noticed that there were three other cages in the arena, each one housing an armored zombie. Our cage came up first, so we sprinted across the courtyard and grabbed a pistol that was laying in a bird bath. We had a limited amount of bullets, and I noticed some explosive containers around the yard, so the goal was to lead the zombies by one of them and take them all out. Easier said than done. Poor Owen fell to that first wave of zombies, and the next survivor woke up in the cage. And the next. And the next.

Not since the safehouse massacre have so many survivors fallen. I can’t even remember their names–that’s how quickly they died. One after another, into the meat grinder that was “the arena.” There were three waves of zombies that had to be destroyed before a second section of the arena opened up. Once I had mastered the strategy of grouping the zombies together and blowing them up (either with the propane tanks, or the one exploding zombie that spawned in waves two and three), I was able to manage the first three waves taking little to no damage. When the large gate opened into the second area, I had about seven seconds before another wave came, and I scrounged for a couple of landmines and a few bullets. There were another several survivor deaths as I figured out where the mines would need to be placed to catch the most zombies (I accidentally blew myself up a couple times), but I managed to get to a point where I would clear out most of them and then lead the few stragglers around while I looked for more supplies. After another couple of waves, my gear bag would respawn, and I could activate the door to a safe room where I could restock my supplies.

So, after at least a dozen casualties, one man finally stood up and decided he’d had enough. 33-year-old street peddler Joseph White was the one who made it through the arena, and after running that gantlet, I decided that he would be the one I finished the game with.

Was I right? Tune in next time to find out.

P.S. On a side note, this particular mission was brutally challenging, and really disrupted the flow of the game in my mind. Everything up until that point was about carefully navigating the world and taking a methodical approach to enemies,. This mission was just a lesson in managing panic and frustration. Honestly, if I had not been trained in the Demon’s Souls/Dark Souls school of never giving up, I would have quit the game at this point. I’m glad I stuck with it, and it was very gratifying to beat this mission, but I do think it was a bad design choice. I think the developers could have accomplished what they were trying to do without making it near impossible to survive. To anyone who beat this in one try–you are a true gaming Jedi.