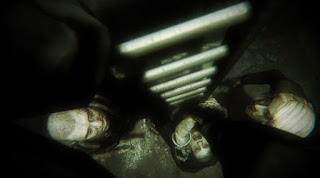 Constable Owen Hussain woke up in the safehouse, which was still mired in darkness due to the generator having run dry. We had to go back to the nursery courtyard to get medication off the corpse of Caitlin Robinson in order to trade it for fuel, so that’s where we started.

Poor Caitlin was wandering around the courtyard, so we finished her off first, and then took out the few remaining zombies that were in the area. After grabbing the medication, we went back to the petrol station to meet with Vickram, but he wasn’t really in a talking mood, as he had turned into a zombie and was eating his own son. We couldn’t abide that behavior, so we put Vikram down like the animal he was. After searching the place, we found an upgrade to our Prepper Pad that let us hack the gate where the fuel was stored behind. We also found a nice pump action shotgun in the gated area, which we grabbed before heading back to the safehouse.

With the generator refueled, our next goal was to respond to a distress call from St. George’s church, where some survivors were trapped. A long and dangerous trek through the catacombs and the bowels of the church later, we got to where the survivors were allegedly holed up–only to find out it was a trap. Owen got hit from behind, and everything went dark.

Owen’s fate was sealed, he just didn’t know it yet. More on that next time.