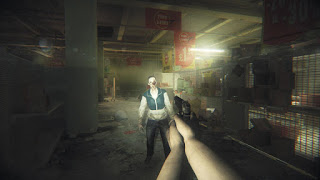 As I wrote about in my last post, my previous character Sarah met an untimely end as we tried to get into the supermarket, but were trapped in a small space with a couple of zombies. Toby, my new survivor, woke up in the safehouse, and our first mission together was to recover our gear from Sarah’s corpse, as the bag she was carrying was full of flares, planks for fortifying the safehouse, and precious bullets.

We made our way back to the market square, and much to my chagrin, the zombies I had alerted when we tried to get into the supermarket were now roaming the square. There were five in all, and I knew that Toby wouldn’t stand a chance if we didn’t take them on one at a time. After climbing up some scaffolding to get a better view, I used a flare to lure a couple of zombies over to an exploding barrel, which I set off with a shot from our pistol. Two down, four to go

The remaining three zombies were stuck behind a fence and some debris, and I was able to find an opening to whack them with the cricket bat without having to fully engage them. I cleared them out, and then hopped over the debris to make my way back to the supermarket.

As I neared the door, I saw Sarah, and I couldn’t help but be a little sad, as I was responsible for her current zombified condition. She wildly attacked Toby as soon as we got close, and we have to cave in her skull (again, sad). Searching through her bag, we got our flares, bullets and planks back, and headed inside the supermarket, where our goal was to get the closed-circuit camera systems up and running again.

Man, the supermarket was creepy. There weren’t a ton of zombies lurking about, but the ambient noises made for a very slow trek through the building, especially when I had to head into the basement. After getting the cameras turned back on, we headed back upstairs, only to be surprised by a zombie as we were coming up. Luckily, the cricket bat did not fail Toby and I, and we made our way to the exit.

Which is where things went bad.

After a loading screen, we were back out in the market square, and face to face with at least four zombies, one of which was crackling with electrical current. I panicked (surprise), and immediately went back into the supermarket. After a few deeps breaths, we went back out again, but the zombies were still right there waiting for us. Knowing there was no way we could take this group of zombies, we sprinted around the corner–and right over the fence/debris pile that you can’t get back over. So, I had to go through the back door of the supermarket again, which, surprisingly, set off the alarm again. Which alerted the horde. As I tired to get poor Toby into the supermarket, he suffered a fate almost exactly like Sarah had before him–swarmed in the small doorway area at the back of the supermarket. I had failed Toby the same way I had failed Sarah.

A loading screen later, Eli woke up in the safehouse, and it was his turn to visit the supermarket.