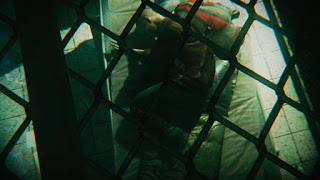 It all started out so well–After waking up in the safehouse, I got Eli to market and we managed to get our gear back from Toby’s corpse and escape the market (I made sure to figure out where I needed to go beforehand).

As soon as we got back to the safehouse, however, Prepper’s voice came over the intercom stating there was a horde of undead on their way, and we needed to defend the area.

My first thought was just to hole up in the main room of the safehouse, hoping there was some sort of “no man’s land” where the zombies wouldn’t come into so that I could pick them off. No such luck, as I had to venture out into the main hallway to trigger the horde, and then chaos ensued.

Poor Eli got stuck in hallway and couldn’t even make it back into the main safehouse room. Very disappointing.

My next survivor, Mason, got stuck inside the small area between the main hallway and the safehouse door (I was trying to create a choke point so that I only had to watch one direction). There were too many zombies, and I couldn’t swing the cricket bat fast enough.

The same thing happened to Sebastian, as I thought maybe the first time was just poor execution. His death told me I needed to run out of the doorway and find somewhere else to fend off the horse.

Up next was Ethan. We got swarmed in a room with three doors as I tried to barricade one of them with wooden planks. No time for that, I found out.

Poor Rose made it to a good kill spot but got surprised. We found a small area behind one of the rooms in the subway, and there was only two ways in. One was a crawlspace that allowed us to hit zombies as they tried to crawl through, and the other was the broken window they had to climb through to get us. Turns out, some zombies can crawl pretty quietly, as we got surprised from behind when we were focused on a crawling zombie.

Finally, Emma Phillips, a 33 year old bobby, took control of the situation. We lured the remaining zombies into the main safehouse room, using the main door to keep at least one out at a time as we battled the ones that got through. Every time they kicked the door open, we slam it shut, and take care of the one or two that got through. Rinse and repeat a few times, and we finished off the horde.