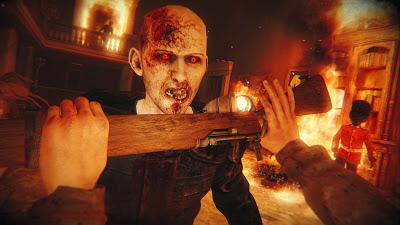 Let me tell you about a 57-year-old wine steward. His name is Isaac Richardson, and he was my survivor for five hours and fifty-six minutes. This is his story.

For the first time in ZombiU, I had to make a decision not to go after the gear left on a previous survivor. I got Isaac to the area outside the palace gates, but there was at least four zombies wandering around, and we had already used a few bullets getting to that point. I literally stood watching them from afar for five solid minutes before deciding to forsake the gear and try to move on. We found the sewer tunnel and made it into the bowels of Buckinham Palace. We lost contact with Prepper, but found a doctor by the name of Knight, who was working on a cure for the plague. We spent the next few hours moving through the palace, finding documents that the doctor needed for his research.

At one point, we completely ran out of ammo, and I decided to have Isaac backtrack all the way back to the safehouse to grab a few supplies. After doing so, I took another chance and went back to the outside of the palace, hoping to find less zombies there guarding our gear. We were in luck, as there were only a couple, and we were able to get Muhammed’s gear, including the carbine rifle. After one more tip back to the safehouse to drop the rifle off, it was back to Buckingham Palace.

The most memorable encounter inside the palace was in the last area where a book the doctor needed was behind a hallway full of zombies. This part of the palace was partially engulfed in flames. With some patience and car, we were able to lure the zombies one by one into the fire, which took all of them out but one–the armored riot cop. We learned a valuable lesson–fire does not affect armored zombies. We had to take him out the hard way. We also ran into some “spitters,” who projectile vomit acid across large areas at you, so they were always the first we’d take take out of any group.

Isaac made it all the way through the palace, and when the doctor requested more documents that would be found in the Brick Lane Flats, we decided to head out that was as well. Before we left, Dr. Knight gave us a syringe and instructed us to harvest zombie bodies for Virucide, a substance that can kill a zombie who’s grappled you and stop you from getting infected. With that, we headed out to the flats.

At the flats, Isaac and I made our way through some warehouses, and lots of zombies. We used a grenade for the first time, taking out part of a mob and some armored zombies, and scrounged for a few supplies (including a shotgun) on our way into the apartment building we were looking for. There was a shortcut back to the safehouse, so we too it and dropped off some supplies before heading back.

And that’s when things went bad.

Not one minute after getting back into the building, we went down to the basement to take an elevator, and were swarmed by four zombies. They were fast, and though Isaac kept backing up the stairs to try and take them one at a time, we eventually found ourselves in a room that we couldn’t get out of. Isaac fell without ever even getting to use the shotgun or the Virucide he had scavenged earlier.

Isaac’s ending was unexpected and very disappointing for me. He had lasted almost six hours, three times longer than any survivor before him, and during that time, he killed 71 infected. In addition to the Virucide and the shotgun he also found the crossbow, upgraded our weapons twice, and upgraded the Prepper pad. Isaac accomplished more during his time than all of the other survivors combined.

Next up was Ella Marshall, and she did not live up to the legend of Isaac.