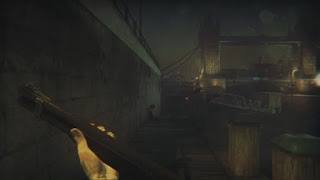 Still stinging from the death of Isaac, Ella and I went right back into the apartment building and finished off the horde that killed Isaac by the elevators. We then had to put him out of his undead misery, which we did, and then Ella grabbed his gear. Shotgun in hand, we went back down to the elevators and pushed the button to head up to the third floor of the apartment building

The elevator alerted the zombies, and we had to fight a couple off just to get the doors closed. Ella dispatched them with the shotgun, but as the elevator rose, more zombies were on the roof, and two of them dropped into the elevator. As if that wasn’t bad enough, the door opened and another zombie ran in. Ella Marshall died trying to fend them off in that elevator, less than ten minutes after she had woken up in the safehouse.

When Finley Patel, a 24-year-old supervisor awoke next in the safehouse, I decided he was going on a suicide run. No extra supplies, just charging into the apartment building and seeing if we could get Ella’s gear without dying. Turns out, Finley was ready for the challenge.

We made it back to the elevators and saw the newly undead version of Ella Marshall banging on the outside of the elevator doors. sadly, it looked like she was trying to complete in death the mission she failed at in life. We had to put her out of her misery in order to get into the elevator, and we grabbed her supplies before getting in.

I was ready for the zombies as I pushed the elevator button, but this time, the zombies on top never fell through the hole. We quickly killed the one zombie waiting when the doors opened upstairs, and started making our way through the apartments. The centerpiece of this series of encounters was a dance party filled with zombies that were so into the music they forgot to attack Finley. We took out an entire room with a molotov and then looted a few items before moving on to find the book the Dr. Knight needed to continue his work on a cure for the plague.

After dropping the book off, we got word that the Ravens of Dee, a group affiliated with Dr. Knight that believes there is a cure, are evacuating from the Tower of London. Against the advice of the Prepper, we headed over to try and hitch a ride out of London. Once there, we found the HQ of the Ravens, and got our hands on an AK-47. Then it was time to battle our way to the roof of the tower to be evacuated. Tragically, Finley made it to the final room before the rooftop, and was killed by the last zombie in the building (who happened to be an exploding one).

Weirdly, opening the last door triggered the cut scene, which showed the evac helicopter crashing. When Caitlin Robinson, a 25-year-old teacher woke up in the safehouse, the evac mission was listed as completed and a new task was set before us–refueling the generator in the safe house, which had just stopped working.