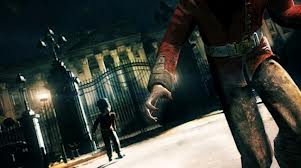 Compared to my previous survivors, Patrick Harrison was a zombie killing machine, taking down 13 infected during his short time as my main man. We didn’t fall for the ambush that took poor Emma, and we systematically made our way into the communications building, where Patrick grabbed a carbine rifle and some ammo. From there, it was on toward the gates of Buckingham Palace, where there were a handful of shuffling undead. We used a flare to lure a couple out and then shot them from afar.

After clearing out the palace gates area, we were on our way to a shelter to rest when a zombie in riot gear dropped from on top of a storage container. We were ready for a fight, but I didn’t count on it taking three whacks of the cricket bat before we could even get the zombie’s helmet off to start doing some real damage. We got backed into a corner and poor Patrick met his end, ten feet away from the safety of a shelter.

Muhammed Jackson was up next, and the first order of business was getting back to Patrick’s body and getting that carbine rifle back. That proved to be fairly easy, as Patrick had done most of the heavy lifting before he died. There were only a couple of zombies to clean up, including Patrick, so we made quick work of them and headed into the shelter to rest.

Coming out of the shelter, we immediately received word from the Prepper (our mysterious guide) that there was a horde incoming. There was an M2 turret set up outside the palace gates, so we sprinted to it and began mowing down the 20+ zombies that started shambling toward us from all directions. Sadly, we ran out of ammo just as the last two armored (riot gear) zombies got to us.

In a panic, I grabbed a molotov, but I’d backed Muhammed into a corner, and when I threw it, we were caught in the spread. The only solace I had for letting Muhammed down was that he was my first survivor who wouldn’t be coming back as a member of the undead, as he was never infected before he died.

Back in the safehouse, 57-year-old wine steward Isaac Richardson woke up. Neither of us expected him to be the best survivor yet, but that’s exactly what he turned out to be. More on his story next time.