It’s great to be back.

If you’ve been following Co-Op Critics for a while, then you know both Nick and I loved Dying Light–it was #1 and #2 on our “Games of 2015” lists, respectively. Dying Light’s first major expansion The Following is our spotlight game for March 2016, and this past weekend Nick, Josh and I dove into it. I’m happy to report that Dying Light remains one of the most fun games I’ve played in years, and the addition of vehicles only makes the gameplay more insane.

The basic storyline in The Following is that Kyle learns about a possible cure for the virus and heads to a whole new area to learn more about it. The countryside of Harran is full of open farmland, and that’s where the new dune buggy-style vehicle comes into play. Just like your weapons, the car will break down and need repair, and you can also upgrade it as you go. 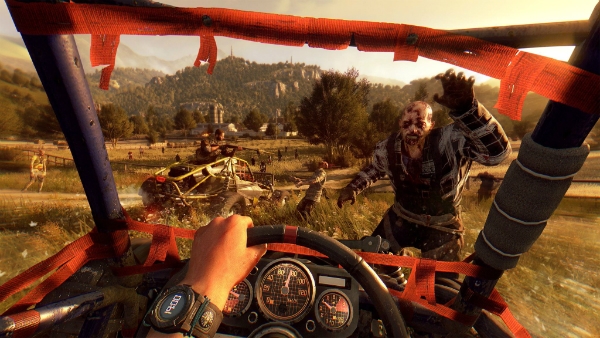 The car is a blast to drive, and it reminds me of a much better handling version of the Half-Life 2 buggy. mowing through zombies as you speed across cornfields is pretty amazing, and it’s almost as much fun to navigate the map that way as it it to grappling hook around Harran’s city buildings. We had a blast speeding around the map and getting used to the driving. So much fun in fact, that we forgot about what happens at night.

If you think getting chased by Volatiles on foot is scary, wait until you see them run as fast as your car. We were laughing hysterically and screaming at the same time as Josh piled into the back of my dune buggy and we drove for our lives.

And that’s the beauty of Dying Light–it’s just so much fun to play with friends. I really feel like it’s this console generation’s Left 4 Dead.

We’ve only just begun our coverage of Dying Light: The Following for March. Stay tunes here and on our YouTube channel for much, much more.