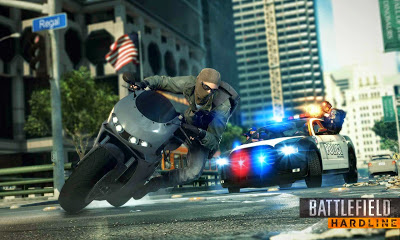 Each episode of Co-Op Critics we take a game or series and have a long-form group discussion about it. This month’s game is Battlefield Hardline, and I was joined by Nick Merritt to discuss our pregame expectations, gameplay changes in single player and a whole bunch of multiplayer.
END_OF_DOCUMENT_TOKEN_TO_BE_REPLACED

While the multiplayer system in Bloodborne has its similarities to the previous Souls games, it has its differences as well. Instead of using soapstones to leave symbols on the ground for other to see, in Bloodborne summoning is done using bells. And while I received the Beckoning Bell (which let’s me summon other players) pretty much right away, I had to actually purchase the Small Resonant Bell with Insight, a currency similar to Humanity in the other games. And in order to even access the merchant where I could buy the Small Resonant Bell, I needed 10 Insight. END_OF_DOCUMENT_TOKEN_TO_BE_REPLACED

Two weeks ago today, Bloodborne was released. And while the last couple weeks have been busy for me outside of gaming, I’ve managed to beat the first two bosses and die a whole heck of a lot. In short, I am having a blast.

And for the first time with the Souls series, I’m streaming and recording a good deal of my gameplay, which has been a really interesting experience as well. Like a baseball player watching videos of his at-bats, I’ve been able to go back and learn from some of my encounters, particularly with the bosses.

This has made Bloodborne a bit of a different experience for me, as I have previously relied quite a bit on guides and let’s play videos to navigate parts of the Souls games that I was struggling with. My previous strategy was to keep chipping away at a particular part of the game until I wasn’t progressing at all, and then seek out a guide or video to give me another perspective.

With Bloodborne so far, I’ve been revisiting my own gameplay videos to see where my strategy is breaking down, particularly with the bosses. Many times I’m just confirming where I thought I went wrong, but a few times I’ve seen things that I was able to go back and do differently the next time around.

Make no mistake, I’ll still be visiting my favorite wikis and let’s players during the course of my playthrough, and I have the hardcover Bloodborne guide on its way to me (if Amazon ever decides to ship it). But, being able to watch pieces of my own playthrough is a new tool that I’m really getting a lot out of. And since learning from death is a core theme with the Souls games, having another way to learn just adds to the fun.