Defenders of the Faith–Part 2: At Home in the Catacombs

Ahh, the Catacombs. An area of Dark Souls I previously hated, but have grown to love playing through them with my Faith build. I’ve spent more time in the Catacombs during this playthrough than with my previous two combined.

For those unfamiliar, the Catacombs are a potentially frustrating area of Dark Souls because the skeletons that populate the area can reanimate if they are not killed with a divine weapon. There are necromancers (six of them, I believe) scattered throughout the level, and until they are killed, they keep bringing the skeletons in their area back to unlife.

Those not playing divine characters often build divine weapons just to play through this part of the game. As a Faith build this time around, I looked forward to tackling the Catacombs with a character uniquely suited to them. By the time I made it to this area, I had upgraded my divine Claymore to +5 (halfway to max), and my Faith stat was in the low 30’s. So for the most part, I ripped through this area without much trouble, decimating dozens of skeletons along the way.

Unlike previous playthroughs though, when I beat Pinwheel (the area boss), I didn’t just move on to the next area–I went back for some co-op. I ended up playing through the second half of the level several more times, helping people through. I also went back and forth through the area a few times, exploring it in a way I had never done before.

With my Faith build, I felt like the Catacombs were almost made for me. It’s yet another reason why Dark Souls is a game that you should play through multiple times. Every approach gives you a new appreciation for the game world.

Here’s a cool video by OreoYifu that features some good co-op in the Catacombs, including a few great invasions. 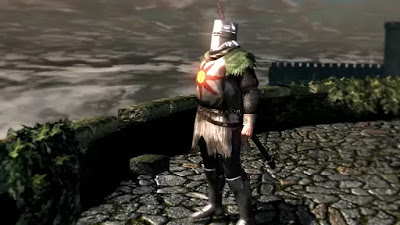 Defenders of the Faith–Part 1: Harnessing the Power of the Sun

My first Dark Souls character was a magic-based one. The second was primarily a melee character, with some Pyromancy spells thrown in. For my third Dark Souls character, I decided to go with the Cleric class and make a pure Faith build, which meant I had my toughest playthrough ahead of me. That’s because from a spellcasting (or Miracle) standpoint, Faith magic is mostly defensive and supportive in nature. Healing spells, buffs, shield spells and utility spells make up most of the list. In fact, the only real offensive miracles for Faith builds come from joining particular covenants. Because I wanted to focus on my Faith stat and use spells as much as possible, I knew I had to join covenants.

In order to get Great Lightning Spear, you need to have successfully helped ten players in co-op. So, many of my early hours with this character were spent in co-op, which was really fun.

Two offensive spells wasn’t going to cut it, though, so I needed to get myself a decent weapon. Once again, Faith builds kind of get the short end of the stick, as there aren’t a lot of great weapons that scale well with the Faith stat. I settled on the claymore, as it has a good move set and is fun to wield. As soon as I could, I began upgrading my claymore through the Divine path. While faith weapons don’t scale as well as many other types in the game, it’s enough to give me a fighting chance in most boss encounters.

So, a good portion of my first 20+ hours with this character spent in co-op, and all of the souls I earned went to increasing my Faith stat and upgrading my claymore.

Next time around I’ll talk about how the Catacombs went from one of my least favorite areas in the game to one I love playing through with my Faith build.